A wet year in many parts of Texas may have you wondering whether to spend time replacing landscape greenery that requires frequent watering. Unfortunately, Texas’ burgeoning population will likely intensify water restrictions, and long-range forecasts still include drought. 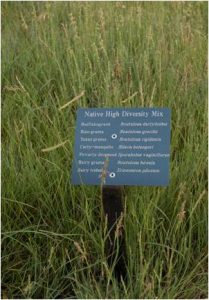 One way take a major chunk out of future watering bills is to replace your traditional lawn of Bermudagrass or other non-native grasses with one that requires less water and other resources. The good news is the Wildflower Center’s native turfgrass, Habiturf® will soon be available as sod.

The turfgrass that includes Buffalograss and two other short grass species found in the South has been licensed by The University of Texas at Austin to a Texas sod producer. The Wildflower Center, as part of the university, conducted research demonstrating that native grasses like blue grama beat Bermudagrass in producing a lush, low-weed lawn.

The Wildflower Center Store and Douglas King Seeds have been providing Habiturf as a seed mix since fall 2011.Bladerunner Farms Inc. of Poteet, Texas, will make the native turfgrass sod available starting next spring so that homeowners who want this quicker installation option have it.*

The Center’s Ecosystem Design Group (EDG) began studying an alternative to traditional turfgrasses in 2007. It did so out of concern homeowners in the Southwest and elsewhere were abandoning lawns because they are resource-intensive. Commercial and private lawns in the U.S. currently use more water, fertilizers and chemicals than any single agricultural crop.

“Traditional lawns rely on one grass species to survive in changing conditions,” says EDG Director Mark Simmons. “By developing an ecologically stable turfgrass that mimics nature, we can help keep lawns a viable option as water and other resources become more precious.”

In research published in 2011, the EDG showed that a combination of buffalograss and six other native grass species could produce a uniform carpet of lawn that stayed 20 percent thicker into the summer than bermudagrass (a nonnative species commonly used as a monoculture in the South).

The thicker native grass mixture also developed half as many dandelions in the study as bermudagrass and buffalograss. A healthy Habiturf lawn should thus require less herbicide to maintain. “Once a native grass system is established, it is self-maintaining compared to many traditional lawn species,” Simmons says.

The improved performance reflects what Simmons has found in studying grasslands on three continents: Different grass species perform different biological roles when combined, assisting one another to thrive.

The licensed Habiturf sod will incorporate at least three of the best-performing grass species from the 2011 study published in Ecological Engineering: buffalograss, curly mesquite and blue grama. The sod is expected to establish faster than Habiturf that is currently available from seed. 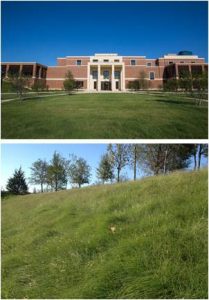 The native grass species in Habiturf have evolved to survive drought that is typical in prairies of Texas, Arizona, New Mexico and Oklahoma. As a result, the sod will be able to go dormant and brown, and then recover after winter weather or periods of reduced watering as many municipalities enforce irrigation restrictions.

Because of such benefits, Habiturf has been installed on 8 acres of the George W. Bush Presidential Center in Dallas. And it is expected to handle weather conditions in the four states where it will initially be grown.

Since 2011, the EDG has learned from Habiturf plots at the Lady Bird Johnson Wildflower Center and from homeowners who have sown a Habiturf lawn from seed that it does better with less frequent mowing than bermudagrass lawns. “These grass species are bison-adapted species, and because they’re used to grazing and low nutrients, they don’t grow as fast,” Simmons says. “That means homeowners don’t have to mow Habiturf except three or four times a year.”

Simmons noted that the resulting lawn would have a “shag pile carpet” effect where the blades of grass fold over on one another. However, homeowners can mow a Habiturf lawn to 2 inches to keep a traditional look.

To see drought resources and the national drought outlook, visit:http://www.wildflower.org/drought-resource-center/