SPRINGTOWN–  Based on Driller’s Reports submitted to the Texas Water Development Board, there were more wells drilled within the boundaries of the Upper Trinity Groundwater Conservation District in 2015 than in any of the other 100 groundwater districts in the state.

Further, there were more new water wells reported in Parker County (559) than in any other county, said UTGCD General Manager, Doug Shaw.

Also, of the 254 counties in Texas, all four of the Counties within the boundaries of the District fell within the top 75 most active counties in the state: Wise County had the 12th most new wells (247), Montague County 59th (78) and Hood County 72nd (67).

“Once thought of as an unending supply of water, modern science and on-the-ground data are now showing us that many areas within the District may potentially face groundwater shortages in the future,” Shaw said.

“The District currently takes underground water level readings at approximately 150 wells in the four counties, and we are constantly looking to increase our knowledge of what may be the most precious resource we have,” the general manager added. For more information please contact District staff at (817) 523-5200. 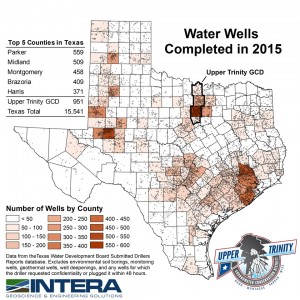